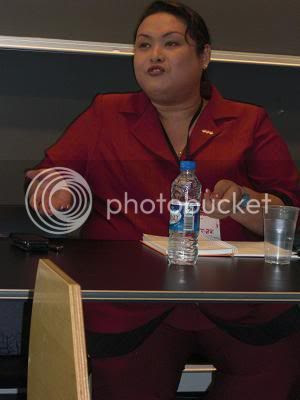 Jen Janice (see pic above) is not a well-known name in transactivist circles but many see her as having done so much more than others for making great strides in the corporate world. Jen Janice is currently a Program Manager for a multinational based in the Netherlands. She has worked for the same company for many years in Singapore where she is originally from until two years ago when she decided to make the big move to their Netherlands head office.

I had the honor of meeting Jen in Copenhagen for the World Outgames where she talked about her rise in the corporate ladder as an out and proud transwoman. We hit it off really well and have kept in touch since. Besides her obvious intelligence, corporate savvy and professional credentials, Jen is a very caring, sweet and motherly person. I know for a fact that she has mentored a lot of underprivileged transgirls while living in Singapore. She is also a great cook and I have seen her whip up a storm in the kitchen producing the most delectable of foods.

It was a shock for me to learn that she was held at the Dubai airport on her way back to the Netherlands on a business trip. She wanted to visit some friend in Dubai but was not let in. You can read her full story below. Fortunately, Jen wants change at the Dubai airport and hopefully her case will be the first step towards better treatment of all especially transgender people when they enter the United Arab Emirates (UAE).


Transgender being refused entry into Dubai

Baffled, sad and most of all upset. Those were the feelings which came up when Jan
Janice reported at Customs at the airport of Dubai - one of the seven Arab Emirates
- together with other passengers. What should have been a pleasant visit to friends ended up in a drama. "As a transgender, I have never ever been so humiliated onto the bone".

Without the faintest idea, Jen Janice got off the plane on that hot December day
and went through Customs. A few days ago she had decided to continue to the
United Arab Emirates to visit some friends, after a business meeting in Kuwait. She
was very much looking forward to it, as it had been a while since she seen her
friends. But in her wildest dreams she would not have guessed the end result. "I
was queuing up at customs and I was dressed modestly. When it was finally my
turn, the customs official studied my passport. He then called for help from passing-by colleague". Jen Janice was stunned. Because she is unable to speak Arabic, she could not make out any of the conversation following that. His stern
facial expression then changed when he heard a remark from a colleague. "I was clearly the subject. A few times, he looked at me in minute detail and then back into my passport. That was so humiliating." Because she has not had her Sexual Corrective Surgery (SRS), Jan Janice is still registered as a male.

And then the long wait started. Jen Janice was taken out of the queue and into a separate room. "Another man joined them and together they started asking all sorts of questions. What I wanted to do in their country and why I looked the way I do? One of the officials just could not understand why I am a man but look like a woman". The men did not know what to do with her. Next, like a criminal she was taken to yet another room where she had to wait for hours again. When I asked if I could call one of my friends, they reacted rigidly that that was absolutely not possible. They also asked me why I wanted to be a woman. They were very intimidating. On top of that, it was very humiliating that more and more customs
officials came into the room just to have a look at me. They all started laughing/giggling. Although it had not been mentioned yet, at that time it daunted upon me that I would be deported."

She still is livid having been put up as a curiosity. "My passport reads that I am a
male. But from when I was nineteen, I already felt like a women. This has never been a problem work-wise. My management and direct colleagues respect me for who I am."
In the airport the doors were opened up and Jen Janice was taken to another room by
some airport ground-handling staff. In the departure hall we caught the attention of quite some people. In the room where she subsequently had to take place were another fifty or-so people from different countries who just like Jen Janice, would be deported. "I then lost courage. I was told officially that I would have to leave the country immediately. I felt dismayed and could have easily cried. My dignity was at stake. No reason was given as to why I had to leave. I was extremely sad that this had to happen to me. I had only wanted to visit my friends and meant no harm. Via Blackberry, I then finally managed to contact my manager. She was on the road and reacted upset when she heard my story. My employer then offered
help and arranged for my return trip. Not easy, because many flights had been canceled due to the heavy snowfall at Schipol airport. I was really lucky being able to leave so quickly. Else, I might have had to stay for two days in that room amongst all those other deportees.

Back in the Netherlands, she is determined not to drop the story. Although the planned visit to her friends was purely for pleasure, her employer is supporting her wholeheartedly. "Early January, I have sent a letter to the Embassy of the United Arab Emirates in Singapore as I still hold a Singapore passport. But up until now I have not received a reply. The Singapore embassy in the United Arab Emirates is looking into the matter. "In future, without a doubt, I will need to travel for business to the UAE more often. So then it should be clear as to what I can expect. We've got a big leap ahead of us before transgender ladies can be themselves. All my life, I've been fighting to prove that I'm just like everyone else. The
fact that I have to continue to proof myself is inhumane."
Posted by PinayTG at 6:18 AM

This is actually a constant struggle for transpeople from countries where no gender recognition laws exist or whose sex-change laws are based on genital reconstruction surgery (GRS).

Arrgh...here we go again with being messed with at the world's airports.

I have to travel to the UAE a lot and i hate having to 'fake' being male just so i can get into their country.
They are a bunch of hypocritical idiots cos when im actually in the country and dress normally, nobody actually has any problems.

I hate the UAE, no i mean i really hate the place. Backwards thinkings people for a forward thinking country!

Hi girls, im currently researching regarding transgendered women entering to dubai. Just got very scared reading this article. I have to enter dubai for work next week, Iam a professional & really need to work there for 3 days. Can you guys help me? Tips on what to do for a smooth entry to immigration? Do i need to act like a man? Wear no make-up? Wear male clothes or just be myself? Hope you guys can help. thank you very much.

@RiaBianca: You have nothing to worry about if you have a permit to work there. There are really no guarantees for a smooth entry through immigration so just be yourself. Just remember that "crossdressing" and "openly" homosexual behavior are banned in Dubai.

Thank you for your quick reply @pinaytg :) So you mean just be myself? Put on makeup & dress how i dress up (female)? My passport's photo looks like a girl & my sex states "M". Im actually considering wearing androgenous clothing, wearing no makeup & somehow acting not very feminate while at immigration. Im so torn. What do you think? Sorry for asking you all these.

@RiaBianca: No worries. I feel you. At this point that sounds like a good option. I have never traveled to the Middle East, so I cannot give you a definitive answer.

I have traveled in a dress and make-up to other countries, though, in spite of my passport saying "M" with no hitch. It really depends on the country. But as this post shows, it seems like dressing down is a good option to take. Perhaps wear something "corporate" like pants or slacks and a long-sleeved button down. Remember though, this is no guarantee that immigration will leave you alone.

So it is important for you to be ready to deal with immigration in case you are subjected to more attention than other travelers. Always be respectful. Speak in a calm and even tone. Just get them to be explicit with you. Ask them to explain their process and make sure your rights are in no way violated.

@RiaBianca: Hi Ria. I hope all's well at your end. Do let us know if your have successfully entered Dubai. I'm sharing this news article with you for more info on the "hypocritical" culture in Duba that Samantha refers to above:
http://www.gay.com/advocate/brazilian-trans-women-detained-in-dubai-for-039imitating-women039

Hiya, I have to stop at dubai on my way to Thailand for surgery , I have a female passport , but I am still concerned about being detained for being transsexual , I can dress in a masculine way I have had BA so thats not practical.

I am worried about this can anyone shed some light on my rights or lack of.

@cat goo: If you will just be in transit, then you should be fine.